I've been very quiet here for a long time, but I'm still here. I pretty sure that not one being on this planet hasn't been affected by this pandemic and the struggles that comes with it. I also had a bit of a game changer in my life and surely I'm not the only one either. But. I'm back at trying to be as selfsufficient as I can be and I think it's time to break the silence and share what I'm up to.

Moving forward. I've actually got my garden going this year, last year I didn't do much. I planted seeds for tomatoes in the beginning of April and they've already moved out into my greenhouse. Some of them are already in bloom!

We still have a month left of frosts and cold weather before we can trust warmer weather to continue, so I'm redoing almost everything in my garden to be better, bigger and weed-free. It's been 18 years since I planted my first flowers in this garden and to be honest, I'm never going to win the war against couch grass. So, I've tried just about everything. I've laid down black plastic cover fabric in more than one spot, that ended up being a big mistake. In every area I put it the soil has eroded underneath the fabric causing a lot of issues. I'll give you one example with our flagpole. It now looks like the leaning tower of Pisa. I've used layers of cardboards and newspaper, edged every bed I've ever dug or laid out with different edging and nothing works! I get a couple of seasons out of every bed and than it turns to a mess of roots from couch grass that just strangles every attempt of growing anything. I've bought more planting soil than imaginable and it doesn't show since everything has been dug up and discarded every time I had to start over.

This time I'm laying out tarp beneath every raised bed and then I attach it to the edge of the bed. I'm just done having this grass from hell keeping me from having a nice garden. It's not how I wanted it to be, but I'm done digging and doing the same task over and over again. With this method of keeping the grass outside of the raised beds I can move them if I find it necessary since I don't dig them down into the ground, their basically just huge pots standing on top of the grass. I can manage pots. I've done that before. I long for the beginning of my gardening life, when everything was possible. Now I'm trying to find that state of mind again. Only in different sized pots.

So, I'll bring you along and I'll try to show how I do it. It's possible that I'm not the only one battling similar issues and if I can make it work someone else might find a new way of dealing with the problem.

This is as always a work in progress, learning as I go. I'll be back to share my new composting experiment that's also a big part of this makeover. 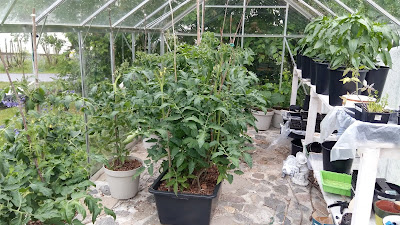 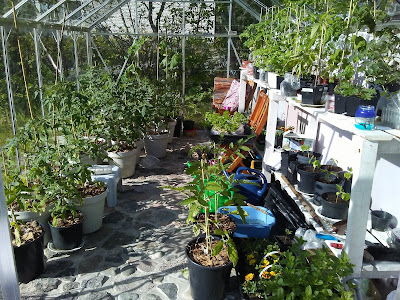 In my greenhouse today

Hello there!
Welcome to my blog.
You can find more about me and the things I do by following the link below and visit my website.
Coffee and tomatoes
I hope you're having a great day.
//S